The epitome of cool. I even wrote a song called “In The Style Of James Dean”. He made being a loner enticing. Now we look upon a loner person as someone most likely to shoot up his classmates. Who was this guy who was with us for only a very short time? 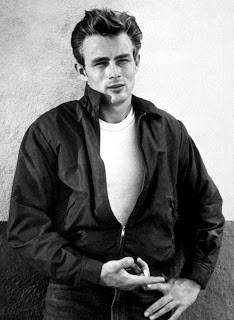 James Byron Dean (February 8, 1931 – September 30, 1955) He was an American film actor and a cultural icon, best embodied in the title of his most celebrated film, ‘Rebel Without A Cause’ (1955), in which he starred as troubled Los Angeles teenager Jim Stark. The other two roles that defined his stardom were as loner Cal Trask in ‘East Of Eden’ (1955), and as the surly ranch hand, Jett Rink, in ‘Giant’ (1956). Dean's enduring fame and popularity rests on his performances in only these three films, all leading roles. His premature death in a car crash cemented his legendary status.

James Dean was born on February 8, 1931, at the Seven Gables apartment house located at the corner of 4th Street and McClure Street in Marion, Indiana, to Winton Dean and Mildred Wilson. Six years after his father had left farming to become a dental technician, James and his family moved to Santa Monica, California. The family spent several years there, and by all accounts young Dean was very close to his mother. According to Michael DeAngelis, she was "the only person capable of understanding him". He was enrolled at Brentwood Public School in the Brentwood neighborhood of Los Angeles until his mother died of cancer when Dean was nine years old.

Unable to care for his son, Winton Dean sent James to live with Winton's sister Ortense and her husband Marcus Winslow on a farm in Fairmount, Indiana, where he was raised in a Quaker background. Dean sought the counsel and friendship of Methodist pastor, the Rev. James DeWeerd. DeWeerd seemed to have had a formative influence upon Dean, especially upon his future interests in bullfighting, car racing, and the theater. According to Billy J. Harbin, "Dean had an intimate relationship with his pastor... which began in his senior year of high school and endured for many years." Their sexual relationship was earlier suggested in the 1994 book, Boulevard of Broken Dreams: The Life, Times, and Legend of James Dean by Paul Alexander. In 2011, it was reported that he once told Elizabeth Taylor, his co-star in ‘Giant‘, that he was sexually abused by a minister two years after his mother's death. 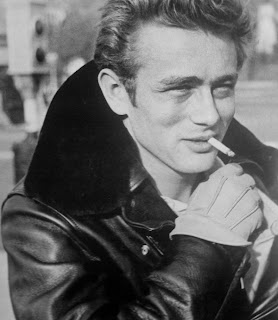 In high school, Dean's overall performance was mediocre. However, he was a popular school athlete, having successfully played on the baseball and basketball teams and studied drama and competed in forensics through the Indiana High School Forensic Association. After graduating from Fairmount High School on May 16, 1949, Dean moved back to California with his beagle, Max, to live with his father and stepmother. He enrolled in Santa Monica College and majored in pre-law. Dean transferred to UCLA for one semester and changed his major to drama, which resulted in estrangement from his father. He pledged the SigmaNu Fraternity but was never initiated. While at UCLA, he was picked from a pool of 350 actors to land the role of Malcolm in Macbeth. At that time, he also began acting with James Whitmore's acting workshop. In January 1951, he dropped out of UCLA to pursue a full-time career as an actor. 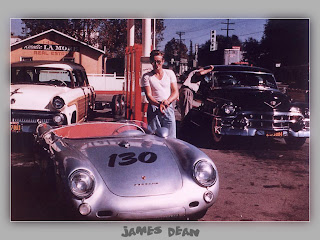 Dean's first television appearance was in a Pepsi Cola television commercial. He quit college to act full time and was cast as John the Beloved Disciple in ‘Hill Number One‘, an Easter television special, and three walk-on roles in movies, ‘Fixed Bayonets‘, ‘Sailor Beware‘, and ‘Has Anybody Seen My Gal?‘ His only speaking part was in Sailor ‘Beware‘, a Paramount comedy starring Dean Martin and Jerry Lewis; Dean played a boxing trainer.

While struggling to get jobs in Hollywood, Dean also worked as a parking lot attendant at CBS Studios, during which time he met Rogers Brackett, a radio director for an advertising agency, who offered him professional help and guidance in his chosen career, as well as a place to stay.

In October 1951, following actor James Whitmore's and his mentor Rogers Brackett's advice, Dean moved to New York City. There he worked as a stunt tester for the game show Beat The Clock. He also appeared in episodes of several CBS television series, The Web, Studio One, and Lux Video Theatre, before gaining admission to the legendary Actors Studio to study method acting under Lee Strasberg. Proud of this accomplishment, Dean referred to the Studio in a 1952 letter to his family as "The greatest school of the theater. It houses great people like Marlon Brando, Julie Harris, Arthur Kennedy, Mildred Dunnock. Very few get into it ... It is the best thing that can happen to an actor. I am one of the youngest to belong." 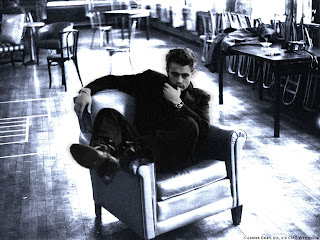 Dean's career picked up and he performed in further episodes of such early 1950s television shows as Kraft Television Theatre, Robert Montgomery Presents, Danger, and General Electric Theatre. One early role, for the CBS series Omnibus in the episode "Glory in the Flower", saw Dean portraying the type of disaffected youth he would later immortalize in Rebel Without A Cause.

Positive reviews for Dean's 1954 theatrical role as "Bachir", a pandering North African houseboy, in an adaptation of the book The Immoralist, led to calls from Hollywood.

Dean avoided the draft by registering as a homosexual, then classified by the US government as a mental disorder. When questioned about his orientation, he is reported to have said, "No, I am not a homosexual. But, I'm also not going to go through life with one hand tied behind my back." 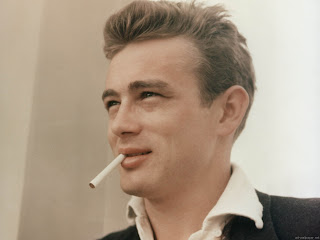 On Friday morning, 30 September 1955, Dean and his Porsche factory-trained mechanic, were at Competition Motors in Hollywood preparing Dean’s new Porsche 550 Spyder for the weekend sports car races at Salinas, California. Dean originally intended to trailer the Porsche to Salinas, behind his 1955 Ford Country Squire station wagon, driven by friend and movie stunt man Bill Hickman and accompanied by professional photographer Sanford H. Roth who was planning a photo story of Dean at the races for Colliers Magazine.

Because the Porsche didn’t have enough ‘break-in’ miles prior to the race, his mechanic, Rolf Wütherich recommended that Dean drive the Spyder to Salinas to get more ‘seat time’ behind the wheel. The group had coffee and donuts at the Hollywood Ranch Market on Vine Street across from Competition Motors (not the legendary Farmer’s Market at Fairfax and 3rd Ave. as previously reported) before leaving around 1:15 p.m. PST. They stopped at the Mobil station for gasoline on Ventura Blvd. at Beverly Glen Blvd. in Sherman Oaks around 2:00 p.m. The group then headed north on CA Route 99 and then over the ‘Grapevine’ toward Bakersfield. 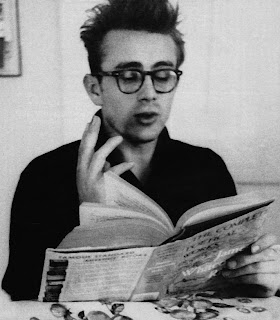 At 3:30 p.m., Dean was stopped by California Highway Patrolman O.V. Hunter at Mettler Station on Wheeler Ridge, just south of Bakersfield, for driving 65 mph in a 55 mph zone. Hickman, following behind the Spyder in the Ford with the trailer, was also ticketed for driving 20 mph over the limit, as the speed limit for all vehicles towing a trailer was 45 mph.

After receiving the speeding citations, Dean and Hickman turned left onto Route 166/33 to avoid going through Bakersfield’s slow 25 mph downtown district. Route 166/33 was a known short-cut for all the sports car drivers going to Salinas, called ‘the racer’s road,’ which took them directly to Blackwells Corner at CA Route 466. 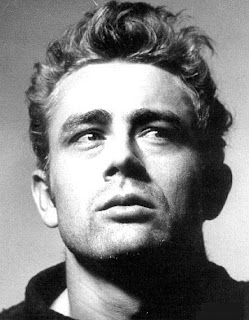 At Blackwells Corner, Dean stopped briefly only for refreshments and met up with fellow racers Lance Reventlow and Bruce Kessler, who were also on their way to the Salinas road races in Reventlow’s Mercedes-Benz 300 SL Coupe. As Reventlow and Kessler were leaving, they all agreed to meet for dinner in Paso Robles.

At approximately 5:15 p.m., Dean and Hickman left Blackwells Corner driving west on Route 466 toward Paso Robles, approximately sixty miles away. Dean accelerated in the Porsche and left the Ford station wagon far behind. Further along on Route 466, the Porsche crested Polonio Pass and headed down the long Antelope Grade, passing cars along the way toward the junction floor at Route 466 and 41. Dean spotted a black-and-white 1950 Ford Custom coupe, driving at a high rate of speed heading east on Rt. 466 toward the junction. 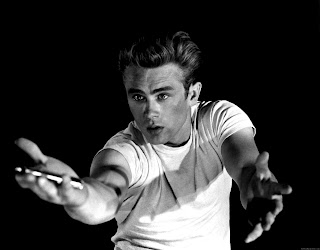 The time was approximately 5:45 p.m., PST. Its driver, 23-year-old Cal Poly student Donald Turnupseed, suddenly turned in front of the Porsche to take the left fork onto Route 41. Turnupseed then hesitated as he 'spiked' the brakes just as the Ford crossed over the center line. Dean saw an impending crash and apparently tried to 'power steer' the Spyder in a 'side stepping' racing maneuver, but there wasn't enough time or space as the two cars crashed almost head-on. The Spyder flipped up into the air and landed back on its wheels off in a gully, northwest of the junction. The sheer velocity of the impact sent the much-heavier Ford broad-sliding thirty-nine feet down Route 466 in the westbound lane.

There have been many questions raised over the decades about the accident: who was driving the Porsche? Were Turnupseed and Dean both recklessly speeding? What was said prior to the accident? Some say that Dean's last known words, uttered right before the impact but after Wütherich told Dean to slow down, was: "That guy's gotta stop...He'll see us."

According to the Coroner's deposition taken of Wütherich in the hospital, and later in a 1960 interview given to an official Porsche magazine, Christophorus, he couldn't recall any of the exact moments leading up to and after the crash

James Dean is buried in Park Cemetery in Fairmount, Indiana, less than a mile from where he grew up on his aunt and uncle's farm. In 1977, a Dean memorial was erected in Cholame, California. The stylized sculpture is composed of stainless steel around a tree of heaven growing in front of the former Cholame post office building. The sculpture was designed in Japan and transported to Cholame, accompanied by the project's benefactor, Seita Ohnishi of Kobe, Japan, a retired business man and devoted Dean fan. Ohnishi chose the site after examining the location of the accident, less than a mile away. 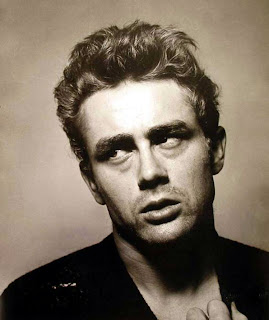 The original Highway 41 and 46 junction where the accident occurred is now a pasture, and the two roadways were realigned over the decades to make it safer. On 30 September 2005, the junction at Highways 46 and 41 was dedicated as the James Dean Memorial Junction as part of the State of California's official commemoration of the 50th anniversary of his death.

American teenagers at the time of Dean's major films identified with Dean and the roles he played, especially in Rebel Without A Cause: the typical teenager, caught where no one, not even his peers, can understand him. Joe Hyams says that Dean was "one of the rare stars, like Rock Hudson and Montgomery Clift, whom both men and women find sexy."

According to Marjorie Garber, this quality is "the undefinable extra something that makes a star." Dean's iconic appeal has been attributed to the public's need for someone to stand up for the disenfranchised young of the era, and to the air of androgyny that he projected onscreen. Dean's "loving tenderness towards the besotted Sal Mineo in Rebel Without A Cause continues to touch and excite gay audiences by its honesty. The Gay Times Readers' Awards cited him as the male gay icon of all time." 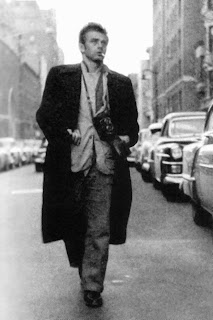 This is the song I wrote in his honor.

This work is released under CC 3.0 BY-SA - http://creativecommons.org/licenses/by-sa/3.0/

Posted by Carroll Bryant at 9:35 AM