Okay, well, I am still here at Jennifer's apartment. We just got done with dinner. It was Taco night I guess you could say. We kind of got into a friendly little food fight and ... anyhow, we'll be settling down soon to watch a couple of movies which will be featured in next weeks reviews, meanwhile, not only did we cancel tomorrow's fishing activities due to a cold front that suddenly is sweeping down into the area, but we'll move on to this weeks reviews.

I confess, when Titanic came out, I was one of those who said that Leonardo DiCaprio was just a flash in the pan. When he followed it up with The Beach, that sealed it for me. Then came movies like “Catch Me If You can” and “The Departed” - and I was simply blown away. Talk about eating your words.

Blood Diamond is a 2006 political thriller film co-produced and directed by Edward Zwick. The title refers to blood diamonds, which are diamonds mined in African war zones and sold to finance conflicts, and thereby profit warlords and diamond companies across the world.

Set during the Sierra Leone Civil War in 1992-2002, the film shows a country torn apart by the struggle between government soldiers and rebel forces. It also portrays many of the atrocities of that war, including the rebels' amputation of people's hands to discourage them from voting in upcoming elections.

The film's ending, in which a conference is held concerning blood diamonds, is in reference to an actual meeting that took place in Kimberly, South Africa in 2000 and led to the Kimberly Process Certification Scheme, which seeks to certify the origin of rough diamonds in order to curb the trade in conflict diamonds. The film received mixed, but generally favorable reviews.

My rating? … 8 Stars. You could do so, so, so much worse than this movie. Really, if you haven’t seen this yet, put it on your ’to see’ list. You’ll thank me later. 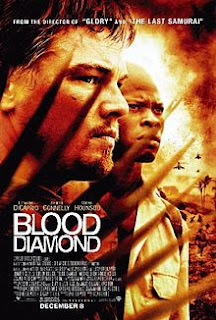 
The adventures of the Lafayette Escadrille, young Americans who volunteered for the French military before the U.S. entered World War I, and became the country's first fighter pilots.

Oh, my God! Ladies, get your man and sit him down for this movie! Now!! Do it right now. Don’t even bother wasting your time reading the rest of this because there is nothing more I am going to say about so …. Yeah …. Go!

What are you waiting for? Why are you still reading this? Go already. Find this movie and well, what I said earlier. Posted by Carroll Bryant at 5:21 PM