Oracle Of Delphi (The Pythia) - By Carroll Bryant

ORACLE OF DELPHI (THE PYTHIA) - By Carroll Bryant

You're everything I wanted which is why I ran
Afraid of your kiss and the touch of your hand
Feelings so deep for you, my Diane
Falling for the scent of your precious skin

Souls Into Shadows - By Carroll Bryant

SOULS INTO SHADOWS - By Carroll Bryant

Nobody heard a scream or a yell
Not even a quiet cry out for help
Man or beast, they all find their god
And only time can tell

Lurking in the darkness, a glimmer of a light
Turning souls into shadows that fade into the night
A madman disease that burns in the fire
A token of desire

Hear my scream, hear my yell
Listen to the quiet cry out for help
A man of beast suddenly finds his god
At the bottom of her hell

Lurking in the darkness, a glimmer of a light
Turning souls into shadows that fade into the night
A madman disease that burns in the fire
A lost bloom of a flower

Maybe this is the night that I lose my mind

Do I expect to repeat that this year? No. I actually don't. And yet, I do. lol

What I mean is, in my heart, I always expect to win, but in reality, well, you know how it goes. You can't win all the time. It would be nice though to do as well again this year as last year. That would be nice. Anyhow, I played a record 16 teams last season and this season, I decided to just go with eleven. I was just going to play ten, but then I figured I wanted to play one of my new teams from last year and I decided on Dak Dynasty, seeing how I am a Dallas Cowboys fan and for as long as Dak Prescott is their quarterback, I will play the Dak Dynasty team. But once he is traded, resigns with another team or retires, I will retire the Dak Dynasty team.

Lets take a look at this years teams! 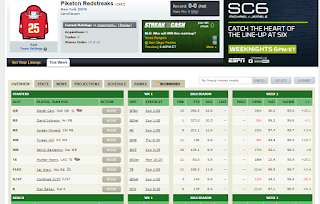 I always open every year of Fantasy Football with drafting Piketon first. They were the first team I ever played (2006). In my first year of playing FF, I played just one team to see how I was going to like it. Of course, I loved it and year two and beyond, I have played more teams in more leagues.

Piketon's career record is 80 -62-1. I have won three championships with them and lost a couple. Their playoff record is 8-3. 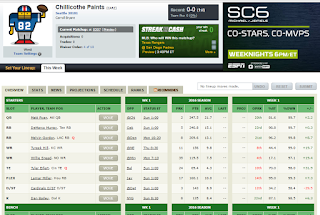 Chillicothe has a career record of 73 -64. I have played in four league championships with them, winning two, the last two years back to back in fact. Their playoff record is, 6 - 4.

Some people have asked why I name my teams after the cities and towns that I do. These are places I have been or lived and they hold a special place in my heart so I honor them in this way. The only teams I have played that I never lived or visited are Utah Cougars and London Tigers. (I played both last season). I played those two teams in honor a couple of friends of mine who live in or near those places. 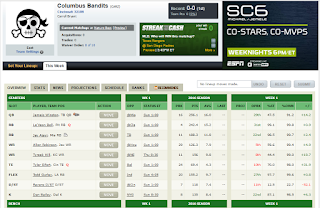 I have played in 4 league championship games over the years with the Bandits, but only winning one of them.

Their playoff record is, 5 wins and 5 losses. 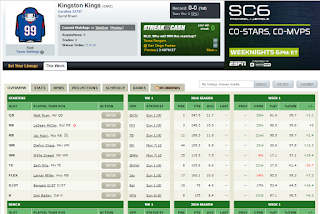 The Kingston Kings are 85-31-1 in their career. I started them in 2008. They have been a kick-ass team in the regular season, but have only played in 3 league championships, winning one (2015).

They have qualified for the playoffs every year except one (2011). 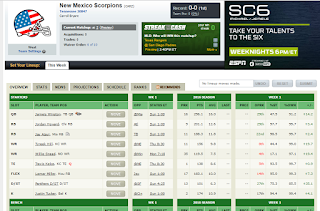 They have played in 5 league championships over the years, winning 3 of them, including back to back championships the past two years.

With 8 playoff wins and 4 losses in their history, they are one of, if not the most, successful team I play. 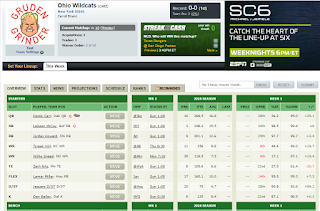 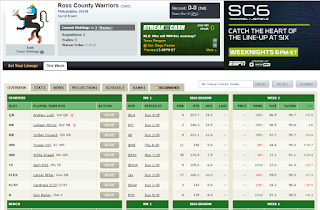 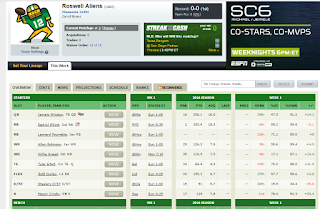 Roswell is 85 - 44 - 1 in their career. They have played in five championship games and won two of them. Their playoff record is, 7 wins and 6 defeats.

They're aliens. They're from outer-space. They are also one of  the teams that won a championship last year. 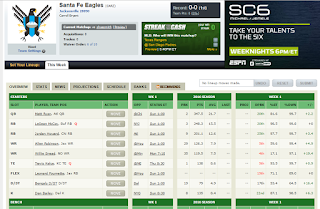 The Santa Fe Eagles court a career record of 65 wins and 46 losses.

They are 5 - 3 in their playoff history. 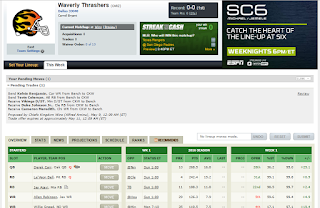 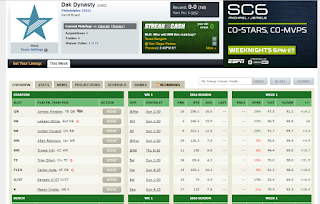 I started Dak Dynasty last year to honor Dak Prescott, the quarterback of my Dallas Cowboys. I had no idea that he would end up starting the year as the starter and would go on to QB the Cowboys into the playoffs. However, this team also did very well, going 9-4 in the regular season and 2 - 0 in the playoffs, winning their league championship game.

I hope for a repeat this year.

And there you go, the eleven teams I am playing this year in Fantasy Football. I can't wait for the season to start.


Posted by Carroll Bryant at 9:39 AM No comments: Links to this post

Power Of Orion - By Carroll Bryant

POWER OF ORION - By Carroll Bryant

They still own the deepest thought in my mind
Some would claim that's dangerous, and perhaps a curse
I still partake in the rituals
I bow to the stars of the universe

The world's aglow, and don't you know
That some goodness can be found
All through the night, and a meteorite
Can come crashing to the ground
So, you have to be strong if you want to belong
To something greater than yourself 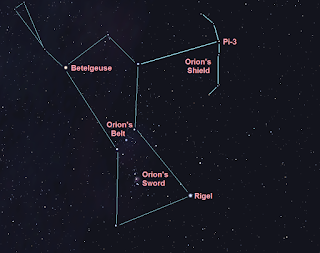 Posted by Carroll Bryant at 11:06 AM No comments: Links to this post