This is the cover of my first CD. "Rock That Country". A collection of country, country rock, rockabilly, country pop and pop. Released in the fall of 2010. (Limited Edition) The cover design was the by-product of me not wanting to get too fancy. The picture is of my father's guitar.

With twelve tracks, I can't recall ever feeling so excited until I published my first book. The feature song is called "In The Style Of James Dean". An up-tempo rockabilly song that starts out as tough as the title, 'I got my leather jacket on / I got my hair slicked back / I'm the total package now / with an attitude Jack'

Although, many like the title song, "Rock That Country". Another up-tempo song that can certainly get the party going,  and "It Never Changes", a pop song describing the plight of a man in love with a girl who is in love with someone else. (As it always seems to go) LOL

Never under-estimate the country ballads, "Jennifer's Eyes" and "The Ultimate High". Or the feel good song, "Dancing On The Moon", which I wrote for my youngest sister. 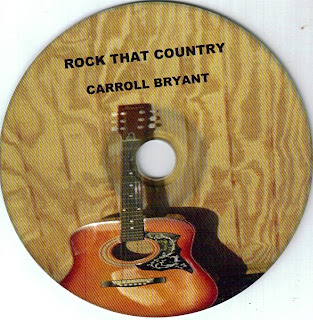 Check out all of my songs on my Youtube channel or click the individual songs below to listen. From country, country rock, rockabilly, pop, pop rock, and rock. TheCarrollBryant

Also check out a collection of my best songs: THE BEST OF CARROLL BRYANT

Also check me out on SoundCloud

Some One Still Loves You - L.A. Confessions -