I have been on Facebook for a long time now. I have seen people say a lot of hateful and dirty things. Hell, I may have said some nasty things, too. Never have I ever seen anyone get banned. Until now.

The damnedest thing is though, the person who got banned was a 76 year old retired cop who has never said a bad thing about anyone. His name is Donald Whitt, and he is a retired Ohio Deputy Sheriff. He finally decided about two months ago to get a laptop computer so he could get on Facebook to keep up with family and friends. He decided to post an old picture of him in his uniform from back in the day and use it as his profile picture. A decision that I believe ended up getting him banned. That, and an article that I posted on my account.

Donald believes there was another culprit involved that led to him getting banned. I wanted to do this post mostly for him in so he could get his side out. When I apologized for the post that led to his getting banned, he simply replied, "It's not your fault, Carroll. The post was fine. It was that guy who responded to my comment. I believe it was him that led to me getting banned."

I also apologized for that, too, because the man in question was a friend of mine as well. Donald told me, "You're not responsible for other people's behavior." 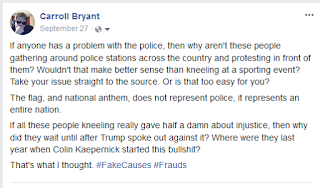 I was merely giving my opinion on this whole NFL players kneeling during the anthem. Donald, being my neighbor, and friend, decided to comment on my post. When he did, he said he never expected someone to attack him in the manner that he got attacked, saying, "I gave my opinion and the next thing I know, some guy by the name of Rick Carufel attacked me and called me a racist murdering pig. The guy doesn't even know me."

I saw that, too. It really got me upset. I know Rick can go off the handle at times, but I was quite surprised by his attack on my friend from out of nowhere. I saw his comment and was shocked. Rick did call him a racist murdering pig. However, by the time Donald and I realized he was banned, and when I decided to post this story, I went back to that post and saw that Rick had edited his comment. This is how it now appears. 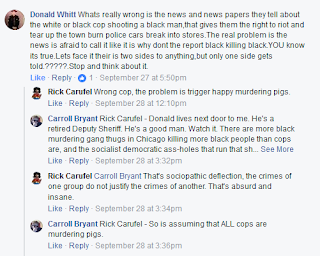 The comment is now, "Wrong cop, the problem is trigger happy murdering pigs."

However, you can clearly see that Rick responded to me. I was agreeing with Donald and what he was trying to say. Rick responded by trying to use the argument that "the crimes of one group do not justify the crimes of another." Calling it "absurd and insane." Yet he has no problem doing it with people / cops as I respond, "So is assuming all cops are murdering pigs." (Which is what he originally called Donald.)

Why is this important to note, that Rick's comment had been changed? Well, the next day, Donald got a FAQ reminder from Facebook. From what I have been told, when someone reports you, Facebook sends those out. But who could have reported Donald? And for what did he say or do that warranted being reported? The answer is, he did nothing and said nothing to have been reported. When I asked Donald for his opinion, he hesitated none to say, "I know who reported me. That Rick Carufel guy reported me. To that, I have no doubt."

But that lone action didn't get Donald banned, it was being reported a second time that got him banned. And there lies the mystery. Donald had not made anymore comments on my posts, but did comment on family and friend's posts as well as post his thoughts on his profile account. Somebody had to been secretly stalking him, and then reported something else he posted. In almost every comment Donald ever made, he seemed to always mention the fact that he is a retired cop. I don't know why he does that, but that's what he does. Maybe he's just proud of it or something.

It's still a mystery as to what other post or comment Donald could have made or posted that led to being reported again, but when I explained the personality and character of Rick Carufel, it was all too clear for Donald. "It was either him, or he got one of his bully friends to do it."

For myself, I don't know. I wouldn't put it past Rick to do it because I know he hates police. Rick is very adamant about being a socialist, and he does hang out with internet / Goodreads bullies so it is possible he has picked up their bad habits. But then I consider he changed his original comment and I can only wonder if he did it to cover his tracks before he reported Donald's comment. Again, knowing Rick as well as I do, it wouldn't surprise me.

Donald did show some class when he responded to Rick on my post.

It continues to remain a mystery why Facebook banned the soft spoken, easy going 76 year old retired deputy sheriff who has never said anything bad to or about anyone. There are only two possible scenarios that I can come up with. One is that Donald is right and Rick Carufel had a hand in it, he and his bully friends. Or maybe Facebook just doesn't like cops. Maybe they just decided to ban him because he has a profile picture of him wearing his uniform. Or maybe both possibilities are correct. Either way, I decided to unfriend Rick and block him. It was a tough decision, but I honestly believe he and or his friends are behind this banning of Donald Whitt. I hope I'm wrong, but there are no other possible options. There just aren't. I mean, Donald is an internet / social media novice. He is always calling me up to come over and help him. Hell, I started his Twitter account for him and I don't think he has been back in there since. lol He just doesn't know how ti navigate that computer or internet.

Anyhow, seeing how Facebook is owned and operated by democrats, as well I'm sure the staff is mostly or all democrats, and democrats are socialists and socialists are evil, well, you know how they are, if democrats can't silence you, they ban you. And as we have been seeing in the real news, Google, Yahoo! and social media in general like Facebook are also cracking down on republicans, and independents like me who do not agree with their socialist agenda.

I hope you get reinstated soon, Donald, although, I wouldn't know why you would want to get back on Facebook again. Then again, you are a forgiving kind of soul. More forgiving than me, I can tell ya.

Posted by Carroll Bryant at 8:33 PM 2 comments: Links to this post

Millions of dollars funneled into The Clinton Foundation during Hilary's time as Secretary of State while Russia was getting diplomatic favors, which included Obamatard approving the sale of 20% of America's uranium.

That money that was going into The Clinton Foundation was suppose to be made public, but wasn't. Instead, it was covered-up.


The dirty democrats doing what they are accusing Trump of doing, of which zero evidence has yet to be presented.

I'm glad I'm no longer a tax payer, I would be pissed right now at the waste of money put into this democratic scam of Trump / Russia collusion delusion.

And now we have yet another waste of life, socialist congresswoman from Florida politicizing the death of a military hero. One of four hero's that were recently killed in an ambush. Democrats are indeed disgusting, and just as I said once in a blog post, the democrat party is America's ISIS.

They are the biggest liars I have ever known. They endorse sexual assault, pedophilia, and make sure they keep the black community jobless, uneducated, and dependent on that government cheese.

I have yet to meet a democrat that could even come close to matching the I.Q. of a fat mans wet fart.

Posted by Carroll Bryant at 8:15 PM 2 comments: Links to this post