The 2018 season of Fantasy football has come and gone. A season I will never forget. I always said that if I ever had a team that went undefeated, and won a league championship, then I would probably quit playing FF.

Well, that quest has largely been the reason why I have been playing the past few years because inside, I really don't have the spark anymore to play. The thrill is gone, as they say, and I have just been going through the motions.

Go through the motions no more. I have finally accomplished my ultimate goal. I have finally done what I have never seen done in all my 14 years of playing fantasy football. I had the perfect season.

I don't know how I did it because I really didn't do a lot of Saturday or Sunday lineup checks or changes. There was a part of me that just didn't care. And then when my mother passed away over the holidays, it took me even further away from the game.

However, my team, Quebec Knights, pulled off the elusive feat by going 13-0 in the regular season, and then winning their league championship. That is a perfect 15-0 for the whole year. The first time I ever saw an undefeated season in all my years of playing.

And now ... I can say that this could very be my last year of playing.

The past five or six years I have been winning at such a crazy clip. Playing 15 or 16 teams every year and getting anywhere from 13 teams or all of them into the playoffs and winning so many league championships. And now this perfect season from Quebec. It's just no longer a challenge. I have bored myself with winning. Trump was right, you do get tired of it after a while. lol

I played 15 teams this year, and 13 of them made the playoffs. The other two teams went down to the final game with a "win and you're in" kind of deal on the last game of the year and ... they didn't win. Of the 13 teams in the playoffs, nine of them made it to their league championship game where five of them won.

And so, here are this years champions, including the perfect season from Quebec Knights. 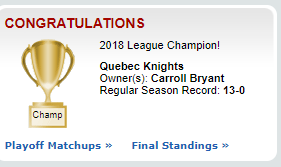 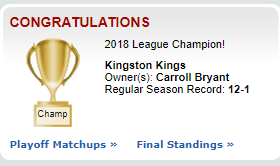 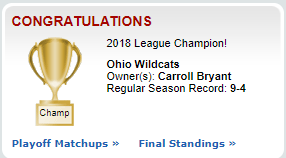 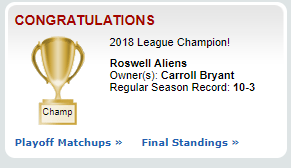 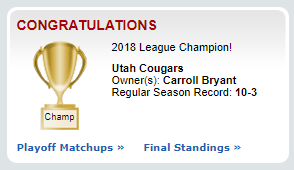 Oh, and Happy New Year everyone.

Posted by Carroll Bryant at 9:49 AM No comments: Links to this post